Historically, the RealSimGear Add-on and Plugin functioned mostly in the background needing very little input from the user. With the release of Version 1.1.0.1 for FSX/P3D and 1.4.0.1 for X-Plane, the Add-on and Plugin's provide a bit more functionality and control for the user.

NOTE: To make use of the personal selector feature outlined in this guide, the firmware on RealSimGear hardware must be updated to Version 3.1.4 or greater. The firmware update instructions which contain links to the 3.1.4 firmware can be found HERE.

In order to better understand the Add-on/Plugin interface documented below, it is first important to understand a bit about the architecture of the RealSimGear hardware and associated software.

To install the latest Add-on or Plugin, please visit one of these locations for the instructions and downloads:

Once the simulator is started and the initial scan is completed, users can access the RealSimGear Add-on/Plugin interface by choosing the following from the simulator menu bars: 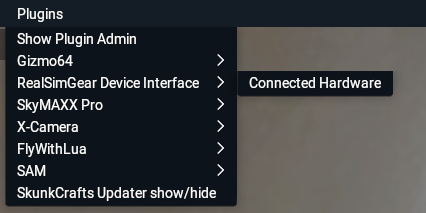 Selecting those options will open up the RealSimGear Interface. NOTE: The interface will ONLY show the hardware you have connected to your system. The images below illustrate what it would look like with a good amount of RealSimGear hardware connected and with all devices updated to firmware version 3.1.4 or newer. The selector option will NOT show if using firmware 2.6.4 or older.

This interface provides information about each piece of hardware connected:

There are three action buttons available:

NOTE: For devices to show a personal selector, they must have firmware version 3.1.4 or greater as outlined at the top of this document. Using older firmware, the devices will simply show up and personal management will need to be done using manual CommandMapping.ini changes.

To make a persona change, simply click on the behavior you want that device to mimic (as outlined below). Once selected, the buttons will turn Blue and the new persona will take immediate effect (and be written to the DeviceMapping.ini file).

Example with selections made

Other hardware such as GFC, GCU, GMA, and switch panels currently do not support the personal selector, but support for that may be added in the future.